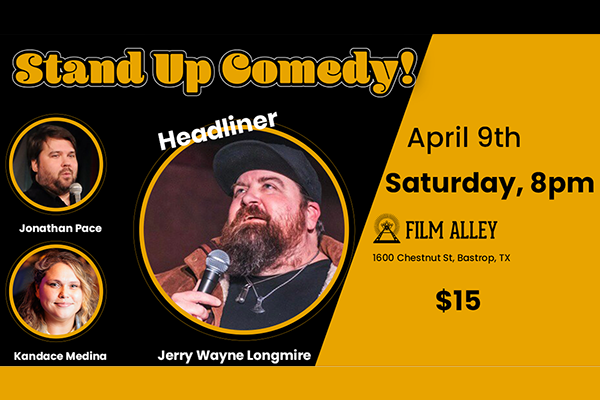 Film Alley Bastrop is hosting hilarious Comedy Nights each month so come out for some witty comedy and clever conversations.

With his playful brand of storytelling and signature twang, Jerry Wayne Longmire is a seasoned performer hailing from Houston Texas. He’s entertained the troops in Iraq and toured with the likes of Bobcat Goldwaith and Ralphie May. His new special, The Reckon Yard, is available on YouTube.

Kandace Medina is an Austin-based stand-up comedian and rude broad. Her comedy is saucy, cleverly risqué, and best described by her dad as “funny… if I pretend she’s not my daughter.” Kandace produces and hosts Backyard Sluts, one of the most successful and long-running shows in Austin and now a regularly featured show at The Creek and The Cave. You’ve seen her at Skankfest, SXSW, and Madison Comedy Week. She’s worked with many esteemed comedians including Laurie Kilmartin and Steph Tolev and performs regularly in clubs all over Texas. Find Kandace at her upcoming shows at The Creek and The Cave and The Velveeta Room in Austin, as well as The Blind Tiger Comedy Club in San Antonio. She can be found @chunkerknugget on all social media.