Bastrop County is a favorite of filmmakers when it comes to projects in Texas. From commercials to major motion pictures, there has been well over 120 productions filmed in the last 5 years all across the county – including Smithville, Bastrop and Elgin. They find our historic downtowns, diverse landscapes, and unique locations to be a perfect combination for all types of productions – and don’t forget our famous small town hospitality! You’ll find ten iconic filming locations from seven movies on our trail, starting in Smithville. The quaint town was designated as the first Film Friendly Town in Texas by the Texas Film Commission in 2006, and both Bastrop and Elgin quickly followed with their designations. In 2019, Bastrop County was designated as the Film Hospitality Capital of Texas by the Texas legislature.

Trek your way through romance, fantasy, horror, crime, comedy, action, and adventure while in Bastrop County! 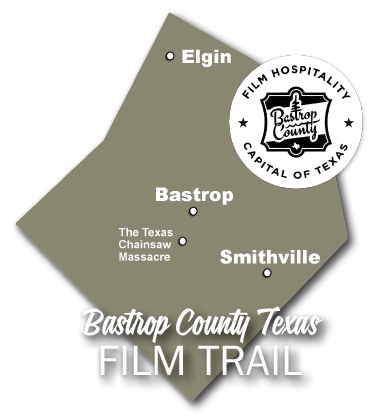 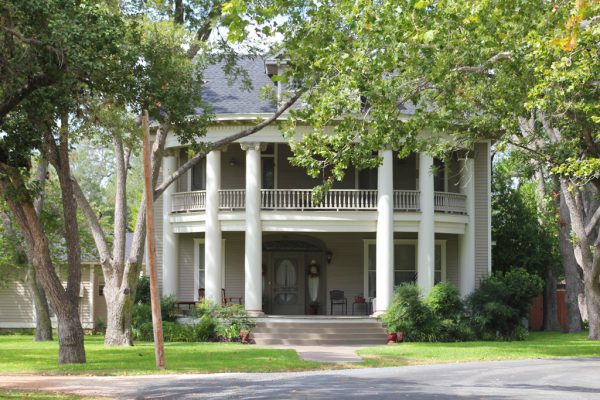 Directed by Forrest Whitaker, Hope Floats is a well-loved example of the romance genre. Movie lovers return to Smithville to see the locations in person, and some even propose to their significant others! 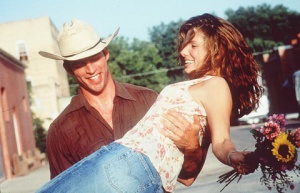 The majority of this movie was filmed in Smithville, Texas, with the parade being filmed overnight on Main Street. Local buildings are used for Honey’s Diner, Temptation Nation Employment Agency, and Snappy Snaps Foto Store. Justin Matisse (Harry Connick Jr.) even waits for Birdee Pruitt (Oscar-winning actress Sandra Bullock) outside of a Main Street building during the final scene. The director paid then Mayor Vernon Richards $1 (framed and hung in city hall) to use the town name Smithville for the film.

There are two stops for scenes from Hope Floats. The first is the McCollum-Chapman-Trousdale House, which is the childhood home of Birdie, played by Sandra Bullock. 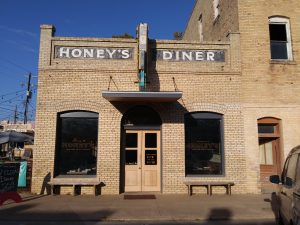 Numerous scenes are filmed in the iconic Honey’s Diner, now a local favorite restaurant and bar.

PLOT: Birdee, a single mom, returns to her hometown of Smithville, Texas following an embarrassing,  nationally televised divorce. She has to deal with former classmates, getting a job, her father’s failing health, a daughter’s heartbreak over the distance from her father, and the potential new romance with Justin after moving back into her childhood home. 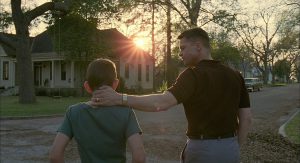 There are also two stops you’ll recognize from the movie The Tree of Life, with the first being the home of Mr. and Mrs. O’Brien (Brad Pitt and Jessica Chastain) and their three boys, one of which is the younger Jack. Older Jack was portrayed by Sean Penn. 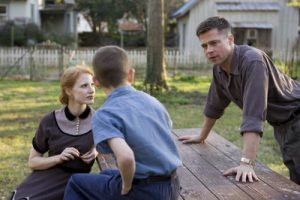 The movie was written and directed by Terrence Malick, who worked on the idea since the 1970s. Producing the film took four years from final wrap to release. A 3 by 5 block area of the historic district was cordoned off, residents relocated, and period automobiles placed in the area, so that Malik only saw 1940s-50s period in the lens. A 65,000 tree was trucked into town in a two-day event from a local ranch and replanted at this address. In the film, the tree acted as a symbol of the continuity of life. 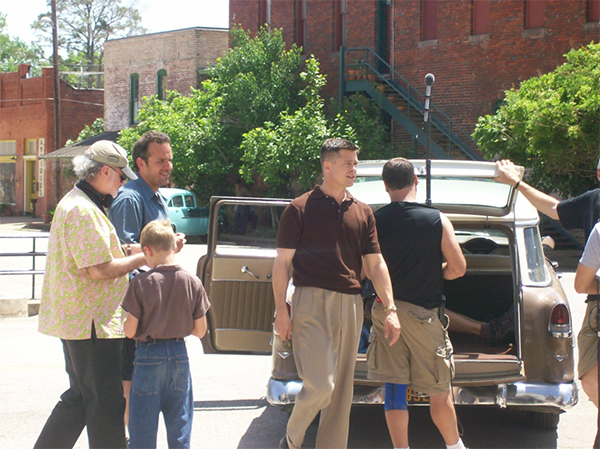 Many downtown scenes were shown on the 100 and 200 blocks of Main Street, including those of Mr. and Mrs. O’Brien.

The Tree of Life is highly regarded among critics and was nominated for numerous awards (120 total nominations, 112 awards), including three Academy Award nominations for Cinematography, Directing, and Best Picture. Internationally released, the film won the prestigious Palme d’Or at the Cannes Film Festival in France, among others (112 total awards). Terrence Malik has now released an extended version with 50 more minutes of footage.

PLOT: The film chronicles the origins and meaning of life by way of a middle-aged man’s childhood memories (Sean Penn) of his family (Brad Pitt and Jessica Chastain as parents) living in 1950s Texas, interspersed with imagery of the origins of the known universe and the inception of life on Earth. 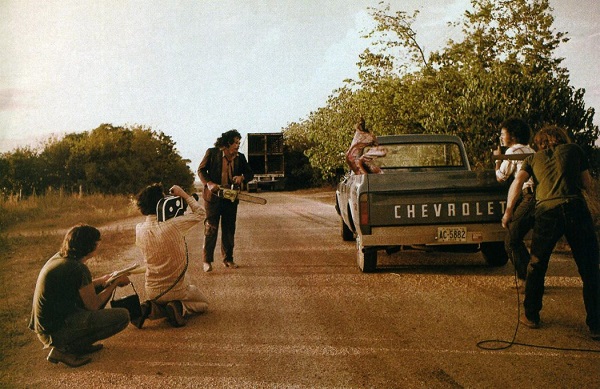 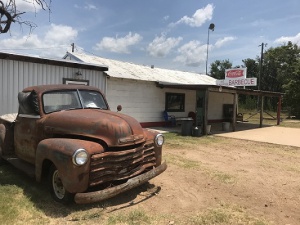 This cult classic, directed by Tobe Hooper, used real props and blood in many scenes and is viewed as one of the most influential films of its genre, setting a new bar for violence and gore in slasher films. Internationally released, some European nations would only allow a “cleaned up” version of the film to be shown. South of Bastrop, The Gas Station is now a cult-classic destination with barbecue, film memorabilia, and cabins for overnight stays.

PLOT: Two siblings (Marilyn Burns and Allen Danziger) and three of their friends go to visit their grandfather’s grave in Texas, but are stranded after they run out of gas and cannot refill because the gas station is out of gas. Seeking help, they end up falling grisly victim to a family of cannibalistic psychopaths featuring Leatherface, who wears a skin mask while wielding his chainsaw. 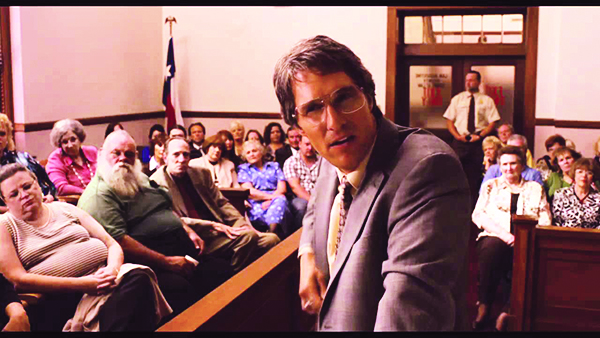 Featuring the talents of Jack Black, Shirley MacLaine, and Matthew McConaughey, this Richardf Linklater directed film is a true story of a 1996 murder and subsequent trial in Texas, where the townsfolk call his actions justified.

Marc Savlov of The Austin Chronicle said: “As ever, truth proves itself stranger than fiction and the human heart (which is stranger and more inscrutable than anything).”

Courthouse scenes were filmed at the historic Bastrop County Courthouse, while the infamous Texas map scene was filmed at the local favorite Zimmerhanzel’s Bar-B-Que in Smithville, Texas.

The courthouse is the first of two stops at Bernie film locations in Bastrop, Texas. 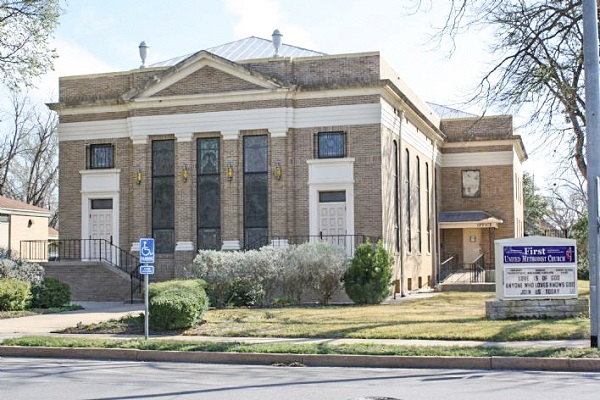 Church scenes from Bernie were filmed at the First United Methodist Church. 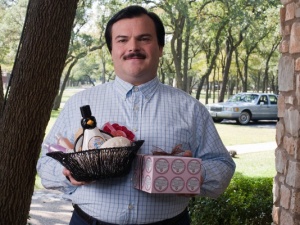 PLOT: In small-town Texas, an affable 39-year-old mortician Bernie Tiede (Black) strikes up a friendship with an unpopular wealthy 80-year-old widow Margorie Nugent (MacLaine), though when she starts to become controlling, he goes to great lengths to separate himself from her grasp. Tiede proved so highly regarded in Carthage that, in spite of having confessed to murdering Nugent to the police, the district attorney (Matthew McConaughey) was eventually forced to request a rare prosecutorial change of venue in order to secure a fair trial. 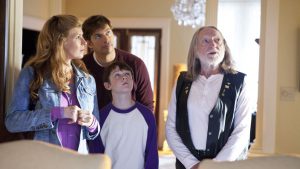 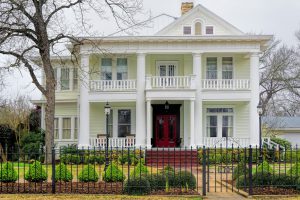 PLOT: As a child, Michael Walker wished every day could be Christmas. That is, until a tragic accident crushed his holiday spirit. Thirty years later, Michael still can’t muster any joy for the holidays, despite encouragement from his playful wife and well-intentioned parents. But when his young son faces a tragedy, Michael needs to make amends with his past. A mysterious man named Nick gives Michael a gift and instills in him the courage to find the joy that he lost. 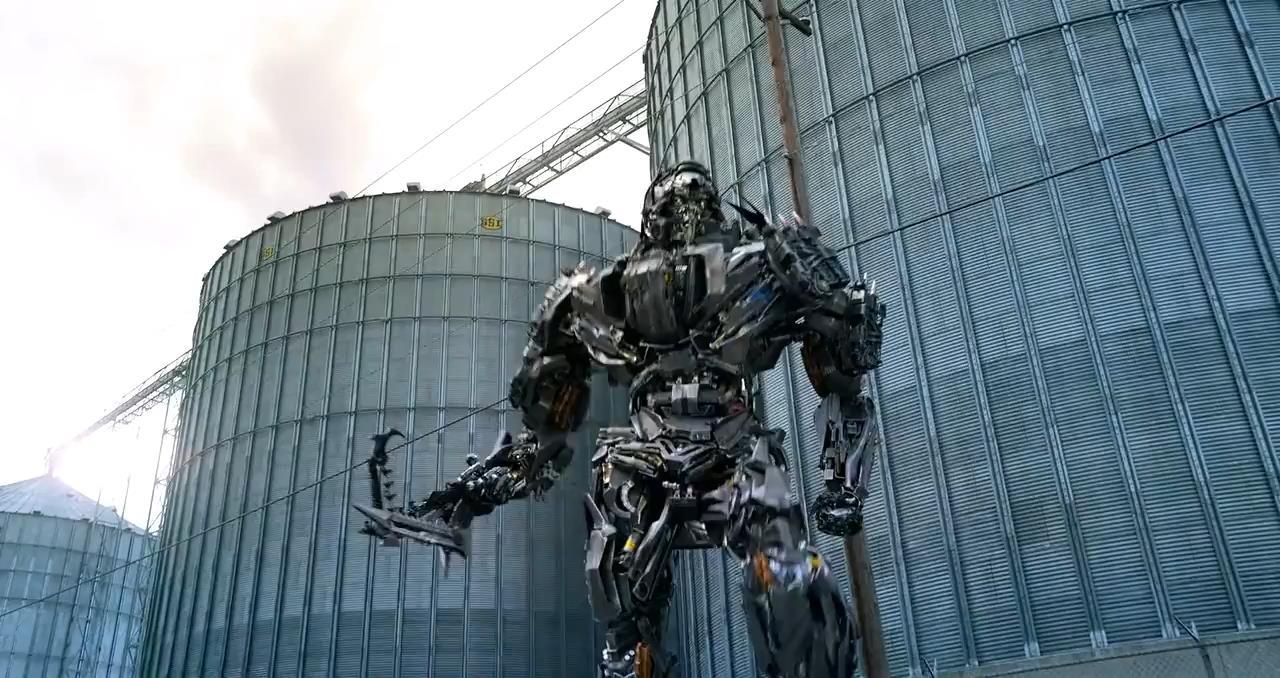 Produced by Steven Speilberg, the fourth installment of the Transformers film series was the highest grossing film of 2014, the only film to earn over $1 billion at the box office worldwide that year. It is the first in the series to not feature the human cast from prior films. Along with international filming locations, Elgin’s industrial area was chosen for a portion of the film.

PLOT: Five years after the Battle of Chicago (in the third film in the series), the Transformers are now being regarded a threat and the government is seeking to disable all Bots, regardless of their alliance. When Cade (Mark Walborg) discovers the injured Tranformer, Optimus Prime, he joins the fight to help the Transformers. 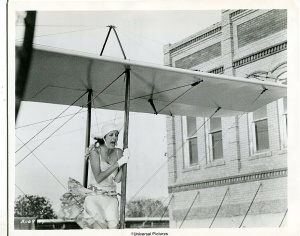 The 1920s-30s period movie was filmed in Elgin, with most flight scenes near San Antonio and in Florida, with an exception for this critical moment in action. Robert Redford stars as pilot Waldo Pepper. In the film, Mary Beth (Susan Sarandon) is performing a stunt as a wing walker when the Standard J-1 biplane lands on Elgin’s Main Street between the historic buildings lining the roadway. Curiously enough, the buildings in the film are not shown in the correct sequence. The cast also includes Margot Kidder as Waldo’s girlfriend Maude and Bo Svenson as fellow pilot Axel Olsson.

Directed by George Roy Hill, the film is highly regarded among aviation historians, with aerial sequences staged by Frank Tallman.

PLOT: Waldo Pepper (Redford) who had missed flying in WWI takes up barnstorming.
acrobatics and later a movie career in his quest for the glory he had missed, eventually getting a chance to prove himself in a film depicting the dogfights in the Great War. During the way he deals with his lack of battle reputation and deaths of coworkers during flights gone wrong, which eventually led to aviation regulations by the Air Commerce Act.

We hoped you enjoyed our Bastrop County Texas Film Trail and scene locations from the quirky movies filmed here!