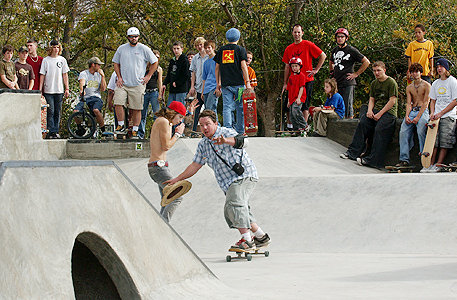 Back to Listings Outdoor Recreation

Back to Listings Things to Do

The Power Plaza Skate Park is a concrete dream come true for those who skate board, skate or bike. The Friends of the Skate Park spent several years to raise funds, which along with an LCRA community development grant, funded the outdoor park on 1st Street at Fawcett behind the Smithville Recreation Center.

According to designer Doug King, the park has a unique design with aspects from both a street plaza and skate park.   “There is a tree in one corner of the park with a flowing “grass river” around the tree and through the rest of the park,” King said. “There are hips, two stair cases, rails, hubbas, a bridge pyramid, grass gaps, wallrides, a snake run around the tree, and lots of ledges.”

The skate park is open to the public during daylight hours, and is under the care of the Smithville Parks & Recreation Department.   Protective gear is required at all times.   The Friends of the Skate Park are in the fundraiser process to built lights around the perimeter for night skating.