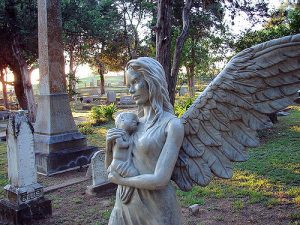 In addition to the museums located further below, here we have compiled several notable sites worthy of attention for our heritage tourists:

Fairview Cemetery – Bastrop
Fairview Cemetery is located on Highway 95 in Bastrop. You’ll find graves of war veterans from the war of 1812 to the Persian Gulf War. A war babies guardian angel statue stands over the area where a number of infants were buried, free, during World War II. The children are from families who had no means to bury their children. The gravesite of Texas Governor Joseph Draper Sayers, numerous legislators and 13 Texas rangers can also be found at fairview.

Camp Swift
About eight miles south of Elgin on Highway 95 is Camp Swift, named for Major General Eben Swift. It served as a major military training facility for 300,000 troops during World War II. The camp was active from May 1942 until July 1946, and covered nearly 56,000 acres. (Today Camp Swift is a training center for the Army National Guard and open to the public for special events only.)

Bastrop and Buescher State Parks
Adapted over thousands of years to local dry climate and soils, Bastrop’s Lost Pines are the westernmost stand of Loblolly Pines in the south. The Bastrop county complex wildfire of 2011 was deemed the most destructive fire in Texas history. Replanting and regrowth is well underway, restoring the beauty of Bastrop County. 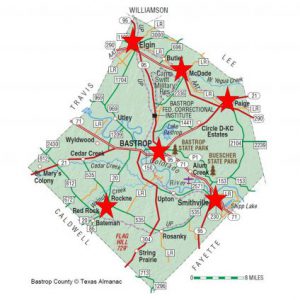 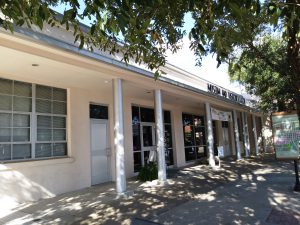 1. In the heart of Downtown Bastrop, visit the remarkable Bastrop County History Museum that includes more than a dozen exhibits about a community that was founded before the Texas Revolution and almost became the Capital.
And stop by the front desk at the Visitor Center which features helpful volunteers armed with handy, easy-to-use brochures and area maps. You can find information about shopping, dining and recreation and see Bastrop’s first motorized fire truck!
Museum exhibits include a historical timeline and fascinating histories on El Camino Real de los Tejas, the Colorado River, Lost Pines, the Baron de Bastrop, World War II, Camp Swift and Cotton. Artifacts span from prehistoric times to the 21st Century, and documents date back to the 1834 minutes of the incorporation of Bastrop.
BCHS quarterly meetings are informative and open to the public. Also, the organization offers docent guided step-on bus tours of the historic district. To schedule, contact Museum staff at 512.303.0057. 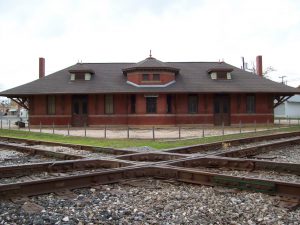 2. Due to a major flood of the Colorado River in 1869, Elgin, a tight-knit community of Bastrop County, came into existence. Originally, the railroad would have run from McDade, 10 miles east of Elgin, southwest to the Colorado River at a point somewhere between Bastrop and Webberville, then to Austin following the river. The City was created by the Houston and Texas Central Railroad in 1872 and named for Robert Morris Elgin, the railroad’s land commissioner. The original plat placed the train depot in the center of a one square mile area.
The Elgin Depot Museum is located in the 1903 Union Depot. It was named, not for the Union Pacific Railroad, but because it was used by two railroads, the Southern Pacific and the Katy. The award-winning restored Depot offers rotating exhibits throughout the year while permanent displays explore the history of the railroads, agriculture, and early enterprises, depicting the role of transportation in the city’s development. The museum offers three exhibit rooms, photo archives, information on the history of the city and railroads, and a gift shop. 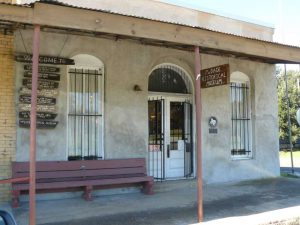 3. The McDade Historical Society was organized in 1962. Their first effort was to purchase and preserve the old rock building at the intersection of Main Street and Loop 223 of Highway 290 in McDade. The Society also encourages historical research into the early history of the town and works to preserve the findings thereof. In the beginning, the Society put on numerous fund raisers to provide funding for restoration of the building. A Texas State Historical Marker greatly adds to its appearance.
McDade is named for James W. McDade, a railroad lawyer with the Houston & Texas Central Railroad. Located in the A. Martinez Survey, Bastrop County, McDade received the first train in 1871. Not everyone favored the Iron Horse. A local preacher often met the train and preached the “evils of the train” to gathered crowds. The name “Tie City” came about because for a time, this was the end of the line and railroad ties were stacked here. Mail came and went by train. McDade’s early history includes notorious gangs, outlaws, murderers, dances, saloons, vigilantes, robberies and hangings. 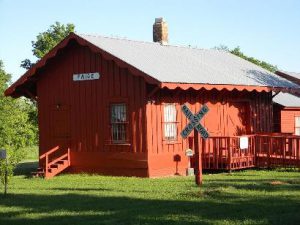 4. A museum in the old depot adjoins the community center on the south side of Hwy 290. The museum is open by appointment – or “any time you see cars parked in front of the museum.”
The town began with the arrival of the Houston and Texas Central Railroad in 1872. The name chosen was to honor the railroad’s civil engineer, Norman Paige. The depot was first located three miles west of the present location, but moved in 1876. Paige was granted a post office in 1874. In 1877, a German immigrant by the name of Fedor Soder arrived and built a cotton gin and store. He bought undeveloped land and broke it into small farms for the more recently arrived German settlers.
In addition to cotton, the town shipped cordwood, produce, cattle and swine. For local consumption and use, Paige manufactured brooms and had both a creamery and a pickle factory. The population declined to 400 by 1914 but the remaining citizens could call one another on the recently installed telephone system.
By 1952 Paige had an estimated population of 220. In the early 1980s Paige established both a community center and a volunteer fire department. The 1990 census reported 275 people and the same for the 2000 count. 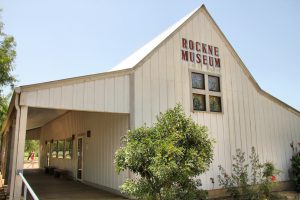 5. The legend of Small Town Texas still exists and can be found in Rockne, located off Highway 20 between Bastrop and Lockhart. Named after the fabled football coach, the town’s actual history goes back to early 1846 when German settlers established a small Catholic farming community. Today the area is inhabited by many of those early immigrants’ descendants. In the heart of the town you’ll find Rockne Museum, built as a testament to life in rural Texas, with exhibits showcasing items of both the nineteenth and twentieth centuries.
Step back in time as you explore two different historic homes filled with artifacts used by the cabins’ original owners. Connect with a thriving faith community as you discover a collection of items from the 19th century Catholic Church, including an ornate altar, beautiful stained glass and baptismal font. Appreciate the hard work and sacrifice that made Texas great as you learn the local ancestry and sacrifices made for the United States’ historic war efforts. Other historic structures include a corn-crib, smokehouse and outhouse. 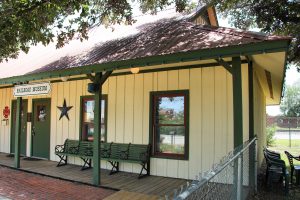 6. With railroad history and artifacts dating from 1887, the Smithville Railroad Museum is fun for railroad fans of all ages. From Smithville’s Main Street, the white gazebo and the 20-foot high 2006 Guinness World Record Gingerbread Man beckon you to the Railroad Park and its special events area. Children will enjoy the playground, nestled between two railroad cabooses. Linger for a picnic and imagine the hustle and bustle of the area during the busy passenger train era.
The community of Smithville was established by Dr. Thomas Jefferson Gazley, who in 1827 settled near the present site and opened a medical practice and store. The major reason for the railroad line through Smithville was to connect mid-west business to Texas and to Houston and Galveston for export. The biggest boost came in 1894 when the Missouri, Kansas and Texas (MKT) established its central shops and terminal in Smithville. The City of Smithville incorporated in 1895, and downtown Smithville became a hub of activities. Smithville remained the largest city in Bastrop County until the 1940s. 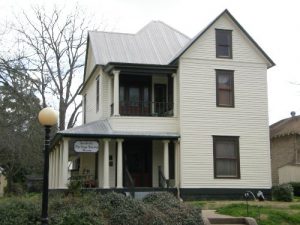 7. The Smithville Heritage Society was organized in 1975. Its mission is to preserve, protect and educate others on Smithville’s rich history. A two-story house built in 1908 was donated to the Society so that artifacts and archives could be stored and displayed. Several years later, a metal building was built in the backyard to actually store the archives and provide office space.
Artifacts and collections include farming and ranching tools such as a barbed wire collection expanding from the 1800s to 1970s, cooking utensils, carpenter tools, furniture and early photographs. Archives are available to the public each Tuesday morning from 10 a.m. to noon, or by appointment. Staff is happy to help you research Smithville area history, your family history or history of homes and businesses in Smithville.
The Society collects its local newspaper, local family genealogy and biographies, MKT RR history, including employment records and lodge books from the railroad, history about the schools, clubs and other organizations in town, plus military and church histories.