As the first town in Texas to qualify for the Texas Film Commission designation, Smithville is known for being “Film Friendly,” with numerous movies from Hope Floats to Tree of Life making use of its charming downtown and pristine neighborhoods. In the 1998 romantic drama, Hope Floats, Birdee Pruitt, played by Sandra Bullock, stands back as her daughter, Bernice, played by Mae Whitman, begs her father not to leave her behind. (Click to view the scene.) Harry Connick Jr. played Justin Matisse, Birdee’s love interest. 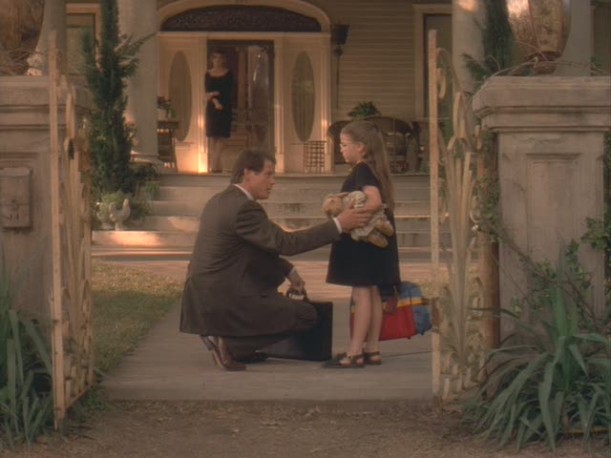 Click here to learn more about the making of the movie.

Much of the movie memorabilia was bought by Troy Streuer, owner of Pocket’s Grill, where the items are displayed in the restaurant.

Currently, the Trousdale family lives in the historic McCollum-Chapman-Trousdale House, where much of the movie was filmed. Just one block off of Main Street, the stately home sits at the end of Olive Street with the back overlooking the Colorado River. This neoclassical-style house  was built for J. H. McCollum in 1908. McCollum was the local undertaker and buggy and carriage maker, and he had a large store on Main Street. In 1917, Dr. Phillip Chapman, along with his wife, Mamie Trousdale Chapman, purchased the home. It now belongs to her grandnephew.

For the movie, architectural details were added to the porch and front yard. See pictures inside and out. For historic reasons, the family asked that the home be restored to its original state after filming. Below is a picture of how the home looks now. Can you find the Hollywood differences in the film?